How to Focus on the Things that Matter

Picture the most charismatic person you can think of. They ooze confidence, are decisive, could convince you of any course of action, no matter how ludicrous and to top it all off they have great hair!

One of the first people I worked for fit this description almost to the letter. As I’ve talked about previously , I’m a big believer in learning by observing others and this certainly fit that bill. But, despite all this raw talent it was actually the flaws I noticed in this fantastic leader that over time provided my real lessons.

I first noticed something one day when I walked into my boss's office to talk through an alteration to a training plan. She was sat behind her desk and, as we talked, I kept hearing a number of small pinging noises.

At each ping she would briefly turn towards the screen on her desk, squint, then remember she was mid conversation and turn back towards me. What was meant to be a quick five minute chat turned into a rather unproductive twenty minute waffle.

For some reason, this stuck in my mind and having seen it once I now began to notice this pattern on repeat. Throughout the day I noticed her rapidly flitting between multiple short term tasks and meetings without actually getting anything done.

As the day would draw to a close and the number of distractions began to decrease she would suddenly become productive working through all the tasks she had accumulated but not worked on during the day. This was particularly sad to see as it often meant she worked late into the night in order to be ready for the next day.

A little later I moved roles and began to work for an almost diametrically different boss. Gone was the raw charisma, style, flare and as it turns out hair (perhaps there’s a link). In place of these came a structured rigidity and process that felt stifling. In all honesty, it was a shock and one that to begin with I didn’t entirely take to.

Despite my initial reaction, as time went by, I began to notice a few things. My new boss was hugely efficient. More interestingly, this efficiency, over time, seemed to infect the whole organisation. And where once people had grumbled about a “micromanaging busy-body” they now began to speak about a “solid operator”. The question I had: how did he do it?

Observing my new boss over the course of a couple of years I noticed that while he employed a myriad of strategies to help improve his effectiveness all of them combined enabled him to do just one thing: control his own time.

This might sound simple but this was a man in demand with responsibility for an organisation of approximately six-hundred people and all their associated budgets and equipment. The way he achieved this was with the combination of a few small habits and tricks that all combined placed him in the driving seat to decide where to dedicate his time and attention.

First on the list: communication. He would schedule two periods into the day at 11:00 and 17:00 where he would shut the door and open his emails. Research shows that our use of technology has severely hampered our ability to concentrate due to the many competing dopamine hits we receive from attention seeking communication channels. These constant draws on our attention lead us to spread our focus across multiple channels for which we pay the price of losing the time that it takes to move between two tasks.

While these slithers of space may in isolation be small, across an entire day, week or year they constitute a huge amount of lost or dead time. Each individual task also takes longer to complete as every time we bring our attention back to it we have to rebuild the mental context we had created the last time we were working on it. We truly do run out of time.

By removing these as distractions my new boss was able to focus on emails when emails were his priority and deal with them effectively. And, while many others would spend all day trading emails he was always able to keep on top of a far busier inbox in a far smaller portion of time.

We’ve all been in a situation where you’ve had your mind absorbed by a problem: you’re turning it round and round in your head, you feel like you might be getting somewhere and then bam, your friendly co-worker just has a “quick” question for you. Right after you answer the, it-turns-out-not-so-quick-question, you focus back to the problem you were facing and with a sigh begin to reconstruct the mental model you had spent most of the morning building. Sound familiar? That’s right, it’s the same issue created by over-active emails: context switching. 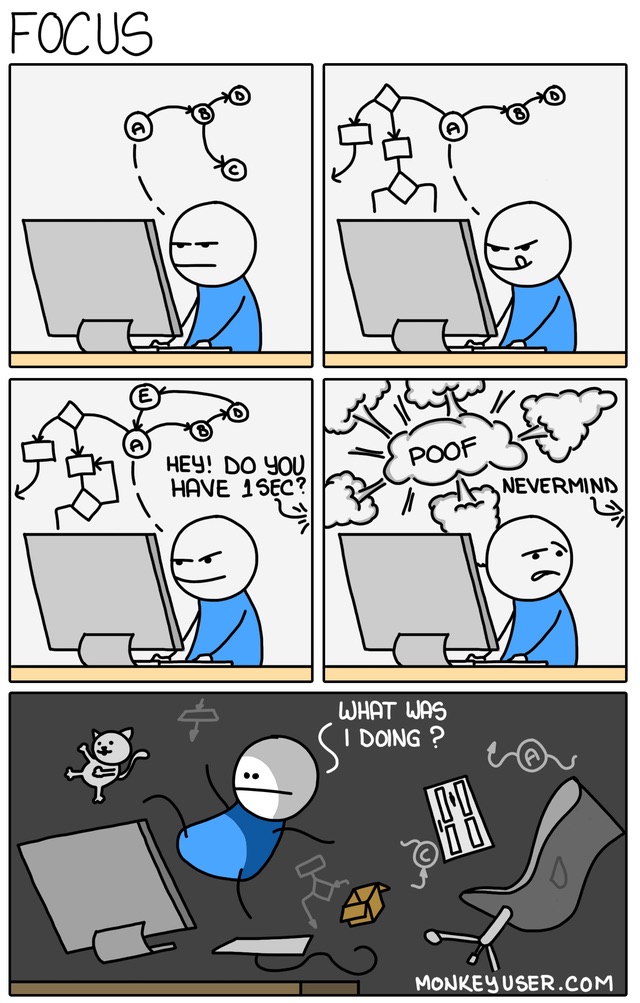 To reduce this cause of context switching my new boss created a gatekeeper: his diary. To see him you had to go through it and nothing was accepted without at least a days notice.

In his experience creating this space would often get people to think through their issues and solve them without the meeting in the first place. Anecdotally, it has been my experience that we are always acutely aware of the use of our own time but rarely have the same level of appreciation for the time we take from others.

As the final line of defence, for those repeat offenders who tried to ignore the structures he had set in place there was always the spectre of the shut door to his office. This was the key sign to everyone that he was working through some planned task and that any interruptions were not welcome.

You’re might be thinking, “this guy sounds like a complete robot”. And, this certainly mirrored some of the initial reactions his subordinates had to his way of working. However, he was also acutely aware of the role that socialising played in allowing him to effectively manage his organisation so he implemented an informal morning coffee break for all the managers that provided an avenue for anyone who needed to talk to him without a meeting to do so. It proved to be great for all the other managers too and really reduced the number of other meetings that previously had taken up so much time.

How Can This Help Me?

You might also be thinking: how do I put this into practice? I don’t have an office, I don't have a secretary to do all this for me. And that’s true for most of us. However, there are definitely subtle things we can do that have the same effect.

It may seem simple but, putting these measures in place can have a huge impact on your ability to get things done. Not just that, but it can massively help with things like workplace anxiety and feelings associated with being overwhelmed by work simply because it places you in the driving seat of your own day and not in a whirlpool stirred by the whims of everyone around you. And just for a second imagine what your workplace would be like if all those around you were efficient, productive, on top of their work and generally respected your time and ability to get things done. It sounds like quite a nice place to work!

This is the second in a series of articles on practical leadership, I really hope it was useful for you. If you would like to read further articles in the series enter your email below and you’ll be updated whenever a new article is published (approximately once/twice a month).